I’ve been an iPhone devotee long before the first one was even released.  When Steve Jobs did the iPhone keynote back in January 2007, like millions of others, I was sold.  I ditched my last RAZR V3xx and Windows Mobile devices, and I sat patiently for June to arrive.

And when it arrived, I loved the iPhone.  But, just like millions of others through the next few years, I was eventually disenfranchised.  Not with the phone, mind you, but with the carrier that Apple partnered with.

True to their core, they didn’t “act” in the right way – as in, using their billions in profit to quickly and properly expand their network to handle all the influx of new customers each month, but with public relations damage control.  WTF?  We were mistreated with douchebag “Seth the Blogger Guy” (even with a stupid name, he must be one of us, so it’s cool, right? *wink*) and a absolutely pointless multimillion dollar “Rethink Possible” campaign.  All this simply fueled the idea that they just never understood the customer, or at least as much as they understood their balance sheet.  Sure, we could all get AT&T 3G MicroCells at our own expense to augment their overpriced, overburdened network, but believe it or not, they have the audacity to charge additional for unlimited use on it as well, and that’s going through the internet connection you have to provide!

Granted, Verizon quelled the hurt of many customers who wanted the iPhone when the CDMA version came out, but even with their own pricey plans, they began to limit paying customers by throttling grandfathered unlimited data users, while also generously handing out overage charges, just like AT&T is doing right now.

Enter Sprint: the latest U.S. carrier to get the iPhone.

Apple almost gave everyone in the United States the ability to use the wireless carrier of their choice for the next generation of iPhone.  Why T-Mobile was left out remains a mystery, but we now have the choice of three carriers: AT&T, Verizon, and now Sprint.

As you probably have seen, there are comparison charts popping up all over the internets speculating the costs to own an iPhone 4/4S on the various carriers.  But, I’m a family guy with five iPhones on my account.  How does it stack up for a guy like me?

My kids, 9, 6, and 4, love the iPhone as much as I do.  They are all technically savvy like their daddy.  But, I’m not about to have them deal with an iPod touch as well as a dumb phone with an even dumber user interface.  Apple made the phone simple enough that my youngest was able to use it at the age of 2.  So, I handed them the older model as the new ones came out.  But, herein lies a problem: my kids don’t really need data, and I definitely don’t need to pay $15 to $30 per child per month just to have a smartphone.

On multiple occasions, I had to fight with AT&T customer service to remove the data plans off my kids’ hand-me-down iPhone 2G’s, and they finally budged if and only if it was the original iPhone.  As soon as I slip that SIM card into an iPhone 3G or better, it’s that instant $15 to $30 per month tacked onto my bill, no questions asked.  To add injury to insult, AT&T refuses to this day to legitimately unlock any generation of their iPhones, i.e. for use on T-Mobile (the only carrier that doesn’t require a data plan on smartphones), regardless if you satisfied the terms of your contract period. 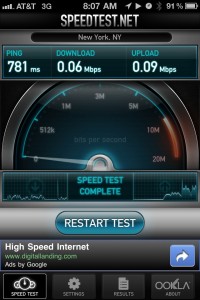 Not-so-impressive results for AT&T's 3G network. Not so impressive for smoke signal communication either.

But, none of that matters when I can’t make a simple phone call on AT&T.  What good is a killer app if you can’t use it?! Even with full bars, I experience the dreaded “Call Failed” screen on a daily basis (I’m convinced that the firmware update to “recalculate” and reshape the signal bars was nothing more than a placebo effect).  People call me and my phone doesn’t ring.  I get voicemails hours later.  I open up Safari and it can’t pull up a simple web page.  Of course, all of this usually happens when I need it most.  Apple blamed AT&T, AT&T blamed Apple.  I replaced my iPhones, my SIM cards, I called and got credit off my monthly bill every so often when they occasionally tell me things like “there are downed towers in my vicinity.”  Seriously, should this be the status quo for a typical AT&T customer?

The time has come.  My children’s iPhone 2G’s are also just too old and slow to use, forever stuck in iOS 3.1.3.  I could just upgrade them to the 8GB iPhone 4’s for an easy $99 with contract, but they’ll be forced into three horrible choices: a $15 data plan for 200MB or a $25 data plan for 2GB, both of which are very trigger-happy for overages by AT&T, or $30 for an unlimited data plan (since I may actually be able to go the “grandfathered iPhone data plan” route), but they’ll be subject to throttling at AT&T’s sole discretion.  I’m already paying in excess of $175 per month for our 700-minute family plan, which does not include any text plans, only two unlimited data plans, and AT&T’s FamilyMap service for all five phones.  I’ve purchased a couple of iPhone 4’s last year, so I may be in a similar “upgrade pricing” boat to tech blogger Erica Sadun, based on her experience.

Verizon’s lowest 5-family member plan with the only data plan they offer $30 for 2GB totals around $280 per month (maybe $250 with my company’s 12% corporate discount).  And, even if I did jump in before their tiered plans, the unlimited data is also subject to throttling at Verizon’s sole discretion.

Sprint gives me 1,500 minutes for the whole family, plus truly unlimited 3G data for all five iPhones, unlimited calls to any other wireless carrier, unlimited calling starting at 7PM, and unlimited texting for a lot less than both carriers.  Wow, that’s a lot of good stuff.  How much?  Just over $205 per month with my company’s 12% corporate discount!  With Apple’s free “Find My iPhone” and new “Find My Friends” feature, I can forgo any similar feature like AT&T’s FamilyMap for $15 per month.  I wish Sprint had a cheaper plan without unlimited texting since Apple now has iMessage, but I’m still faring much better with Sprint’s plans.  And, they’re signal strength, call quality and reliability, and data throughputs are just fine.  What a concept!

While I’ve been against wireless carriers for imposing data plans on smartphones, especially those equipped with Wi-Fi, I’ve temporarily surrendered to the idea of having data plans on all my family’s phones, especially if they’re truly unlimited, and the price difference from what I’m paying now for AT&T’s shitty service is negligible.  I just don’t want to have any worries about having to go over a tier and getting charged for it.  I don’t want any worries about being throttled and waiting until the next billing period to get back to regular 3G speed.  I’m not going to jailbreak my iPhone and install MyWi to pull 20GB a month like some pricks who ruin it for others, but if I want to enjoy a movie on Netflix or watch Real Time with Bill Maher with the SlingPlayer app every now and then, I really shouldn’t have to stop and think and calculate against some arbitrary usage counter.

Which also brings up another good point:  AT&T snobbishly released a statement saying that their iPhone is better than other carriers’ iPhones.  Well, with all this talk about utilizing blistering 14.4Mbps 4G HSPA+ speeds, stop and ask yourself this:

What good is that speed if you’re going to hit a limit that much faster?!

Try buying a Ferrari that you can drive 200 mph only for the first 20 miles, to which you’ll be forced to drive at 35 mph until you reach the state border.  Or, if you’re of the tiered flavor, how would it feel if you have to pay hefty tolls every 20 miles to be allowed to maintain that speed?  Is it still worth it, month after month?  The device is only as good as it’s carrier.  Since all the iPhones are the same, their notoriously dropped calls, unworthy data plans, and piss-poor reliability easily makes AT&T the worst choice possible for a carrier of the iPhone, let alone any other device on their network.  Skewed surveys and select people will say otherwise, but real-world experience tells me otherwise and that it’s a hit-or-miss, something that I’m no longer willing to tolerate. AT&T’s network is like driving with an annoying kid in your passenger seat of your Ferrari, yanking on the parking brake at his every whim.  It isn’t fun and downright frustrating.

I got on the horn with Timothy Rupp, Account Manager in Sprint’s Business Marketing Group, who quickly set me up with a preorder on Friday morning for five new iPhone 4’s and 4S’s.  He was incredibly professional, patient, and polite, and I couldn’t be more happy to enter into the world of Sprint in this manner.  If you’re looking to get iPhone 4/4S’s or any products or services, you’re welcome to give Timothy a call at (347) 596-0488 or email him at timothy.rupp@sprint.com.  You’ll be happy you did.  I know I am.  I can’t wait for next Friday.

This site uses Akismet to reduce spam. Learn how your comment data is processed.

BeyondtheTech is a
Corona Labs Certified Developer and Ambassador