My Interesting Adventure in Buying an iPad 2

When the iPad 2 came out, I found a buyer just in time for my first-generation iPad. Like many others on Launch Day, I spent a few hours on line at an Apple store. I was lucky enough to get the second-to-last one they had available: a black 16GB Wi-Fi model.  That’s all I needed for the wife, since she doesn’t store a lot of media, and she uses it primarily in the home with plenty Wi-Fi to go around.

However, my need for an iPad 2 came a little bit later, as I needed a dedicated device for continued game and app development with Corona SDK. So, when Radio Shack announced their “Earth Day Trade and Save” Giveaway (the grand prize was a 2011 Nissan LEAF) as well as being an additional authorized retailer for the iPad 2, I thought it would be a no-brainer to buy it there. Thus begins my adventure.

Heading over to Radio Shack over the next few days, I was able to trade in a bunch of old phones to ultimately end up with a generous store credit of just over $300. “Not bad,” I thought. “Just $200 more plus tax and I’ll have me another 16GB Wi-Fi iPad 2.”

However, finding an iPad 2 at a Radio Shack store proved a bit more difficult than I had initially anticipated, and the fact that the iPad 2 was selling out at Apple stores and other retailers would only exacerbate the problem.

Radio Shack has over 5,000 locations across the United States, but only 500 of those stores are authorized to carry the iPad 2. When you go to their website and search for the iPad 2, you’re brought to this page where it shows a drop-down state list of participating stores, which then updates the page with the stores separated by cities or general areas. Locations only. No telephone numbers. How inconvenient.

So, after Googling and calling almost three dozen stores in New York and New Jersey, I found a store in New Brunswick, NJ that had a 32GB Wi-Fi model in white. “Ok, $100+ tax more for an extra 16GB. I suppose I can make do with that,” I thought to myself.

“The total will be $725,” the store manager responded.

“It’s bundled with AppleCare,” he added.

“I don’t want to buy it with AppleCare now, I just want the iPad 2.”

“I’m not selling it without the AppleCare. It’s a bundle,” he responded arrogantly.

Not looking to lose the opportunity, I made my way down there, thinking maybe I’ll just return the unopened AppleCare box at a later time. Maybe there would be a case, Bluetooth keyboard, or Smart Cover instead I could exchange it with. But the idea of being forced into an additional accessory was something I wasn’t initially prepared for, nor was I generally happy about it.

Quickly, it dawned on me that Radio Shack is a different sort of animal. They’re commission-based, unlike the Apple store. I’m a business guy. I get it. At the same price point, they’re obviously not making any significant profit in selling the iPad 2. They would probably get more profit in selling the warranty. But, not having their phone numbers on their own approved store list seemed just like a mean attempt at getting people into the store for additional and unexpected purchases. None of that mattered when I showed up, as I found out that it was already sold to someone else – as a forced bundle as well, I gathered. 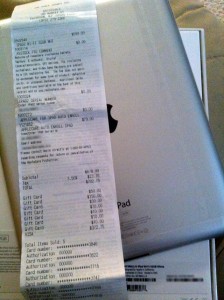 My Radio Shack receipt for the iPad 2 "bundle"

It only took two days before a store in Paterson, NJ had the same model in stock. Same stipulation, though – iPad 2 is sold as a bundle with AppleCare. I raced up the Garden State Parkway and an hour later (nearly twenty minutes of it was looking for any parking spot in the jammed streets of Paterson), and walked into the store.

Mind you, other tablets and devices were sold at many Radio Shack locations as well. The Motorola XOOM was there. So was the RIM BlackBerry PlayBook. There was also some Android-based Pantech e-reader. Then, there were other Apple products, like the iPhone 4 and iPod touch. None of them required an additional warranty nor was part of a bundle not to be sold separately. So, what gives?

The sales representative Stephanie was polite and helpful, but said they couldn’t even ring it up separately. I offered to get another item, such as a Smart Cover, but they wouldn’t budge. Spending more than I anticipated, I reluctantly bought the bundle: 32GB iPad 2 Wi-Fi in white, with the AppleCare warranty, and after $678.99, I was out the door. But, if you know me, you know I wasn’t going to sit quietly. In my opinion, this whole thing felt shady. And I honestly doubted Apple was aware of it.

One of the first things I did was power up the iPad 2 to set up MobileMe. I immediately fired off a detailed email to Steve Jobs at Apple, as I usually do when I come up with something I think is clever, or if have a legitimate complaint about something such as this. I do this “sparingly,” so as to not to seem like some spammer or annoying fanboy. On a side note (and in case Cupertino is reading), some of the things I emailed him in the past four years (in no particular order) that I thought were quite valid:

Needless to say, in those four years, I’ve never received a single reply email from Steve Jobs. I would like to think that some of these ideas managed to make its way to some engineer or developer’s “to-do” list. But, nothing surprised me more than when I received a call from a 408 area code two days after sending that email to sjobs@apple.com.

That phone call came from John Brandon, Apple Vice President of the Americas and Asia Pacific. “I got an email forwarded from Steve Jobs that you sent regarding your shopping experience at Radio Shack and would like to talk to you about it,” was pretty much how it started off.

First, he apologized for my experience and wanted to get all the details. He was absolutely committed in making things right and asked if there was any way he could make it up to me. I’m not a dick – I didn’t want a free iPad 2 or something. I told him that, if anything I would have rather gotten a Smart Cover at purchase than AppleCare, since we usually have the opportunity to buy it within the first year of the purchase date. He offered me a leather Smart Cover with the color of my choosing and told me that he will contact the powers that be at Radio Shack regarding this matter.

Within the next day, I got a call from Radio Shack’s Regional Sales Manager Tom Maria who also apologized for my shopping experience at their stores. I told him that I’d rather not keep the AppleCare and get a refund for the time being, but more importantly, that other potential customers should not be Googling up each store for their phone number, calling them for iPad 2 stock, driving there, only to be forced into buying it as a bundle. He completely agreed with me and told me that it wasn’t company policy to mandate a bundle. He then coordinated with a local Radio Shack store in my area to process a refund, which requires a special override with a manager. Apparently, purchases of AppleCare are immediately funded directly to Apple, so refunds are not usually permitted at the stores. The refund process was smooth and my adventure was finally coming to a close.

So, I got the iPad 2 I sorta wanted (the additional 16GB turned out to be more useful than I thought). I received the tan leather Smart Cover in the mail overnighted by Apple, which I happily gave to my wife in exchange for her grey non-leather Smart Cover (Eschet Chayil, I say). A week passes, and an envelope arrives in the mail from Apple. Enclosed is an AppleCare certificate stating that my iPad 2 would be covered anyway until May 2013. Nice touch, guys.

For Apple to have gone above and beyond the call of duty like this, from getting direct phone calls from the Vice President (and Account Executive Dominic Rapini) at Apple, to the Regional Sales Manager at Radio Shack, plus email correspondences that were CC’ed all over the place including Steve Jobs himself, and complete assurance and follow-up from both sides, it really shows how much it is all about the customer, from the technological aspect in the hardware and software to the consumer aspect in the retail stores. In regards to Radio Shack, I’ll take Mr. Maria’s word that there was no imposed bundle (I actually called other stores in New York, and they never made any mention of a bundle with their iPad 2 sales). So, I’ll chalk it up to the likely effort of some “enterprising” or “aggressive” managers or directors at the store level who wanted to ensure additional sales with those iPad 2’s. And, it’s nice to see that they updated their iPad 2 page with phone numbers next to their store locations, too.

On top of it all, at least I know that people’s emails to sjobs@apple.com are actually going somewhere. The only icing on the cake would have been getting that Nissan LEAF from the Radio Shack giveaway, and/or a direct reply from Steve himself, but nevertheless, it’s mission accomplished: I’m happy with my iPad 2 with its bonus leather Smart Cover and AppleCare warranty, and I’m still an active customer at both Apple and Radio Shack. I had faith they would listen, and they did. I didn’t want anyone to be losing their job over this, unless it was malicious or intentionally deceptive. So, hopefully it’s no harm, no foul.

It didn’t even dawn on me that the sales tax in Paterson was only 3.5%, too. Every little bit helps. All’s well that ends well!

Perspectives
Even My Love for Apple Has Its Limitations
Thank You, Steve.

This site uses Akismet to reduce spam. Learn how your comment data is processed.

BeyondtheTech is a
Corona Labs Certified Developer and Ambassador